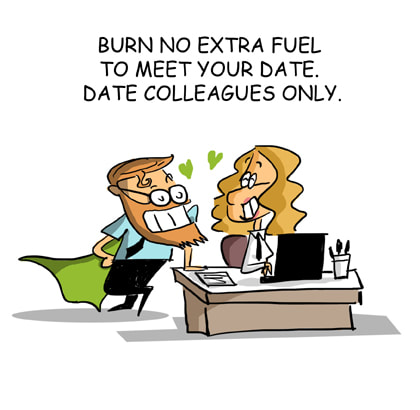 Green Humour.Com cartoon by Rohan Chakravarty
How can 'environmental humour' be used?

Green Humor can be used in our campaigns for:

Helping our audiences to engage and empathise with green causes

Instilling hope, inspiration in to our campaigns, and stirring up gut reactions

Toning down the seriousness or gravity of the material to make it more accessible for the average person.

ANSWER.  Current social trends would suggest they are .  With Chat Rooms, Memes,  Facebook, You Tube videos, Commercial Advertising all realising the power of humour - the world has fast become our FUNNY OYSTER ....   so to speak.  People Get Funny. They Don't Warm to Serious.

Green Humour helps in breaking down barriers, and is now seen in all walks of life including -

Eco-creative messages with humour are more ideal where the subject-matter is relevant to our daily lives, such as, how we dispose of our foods/packaging,  how we manage pests and invasive species,  transportation, domestic choices, energy reduction in our homes etc.

global catastrophe such as nuclear plant disruptions or people losing their homes through sea levels rising it can be poor taste to introduce humour, but it will always depend on the way it's depicted.

(1) Good-will factor - does the video, joke, slogan etc carry good-will inputs towards environmentalism itself, as opposed to merely satirising or lampooning environmentalism as its main objective?

(2) In the case of videos, are the characters ones we can empathise with or identify with? In other words, does the video inspire our empathy?

(3) Does the joke, video, slogan talk up the activity or message being promoted, rather than talking down a specific activity, and

(4) Is the video, joke, slogan memorable, catchy or uplifting, and also funny?

No one said environmental humor is easy to achieve - after all, our green messages can be quite prescriptive. In a nutshell, green humor/humour is fine if it's good- natured (not attacking the environmental movement or belittling people or their situations). There needs to be a strong or even subtle undertone suggestive of positive environmental action. And probably the best environmental humour is effortless and subtle and actually doesn't have to be gut-wrenchingly funny at all.

Green Humour takes the message outside of the realms of seriousnessness and preachiness, and that's what counts.

In my e book, Green Spin (Or) Promoting the Green Message - the topic of green humour is gone in to in a lot of detail.

A few EXAMPLES of very effective VIDEOS about environmental issues - where humour plays a big part.

The messages in these videos are pretty self-explanatory so don't really need commenting on.
Eco-Comedy Video Competition

Congrats go to entrants in to the Eco-Comedy video competition, Spring 2013 courtesy of American University - Center for Environmental Film-making, Washington D.C.  It's harder than you think to draw attention to climate change and environmental matters in 3 minutes in a way that draws out empathy in a broad audience, while being funny  (good old fashioned slapsticky humour) at the same time.
The winning video in CEFM and Sierra Club Eco-comedy video competition is by  - Craig Schattner, Executive Producer, Director, Adam Walker, Producer and Emil Superfin, Producer: "A Brief History of the 5-cent Bag Tax".

Josh won the competition previously for his well-known eco rap video An Inconvenient Proposal.
More funny green videos including ones containing eco rap, singing and dance are featured throughout the converse conserve blog.

WHAT IS ECO SCREENING?

Creators of dramatic, digital productions, video, film, TV drama, and advertisers instil suggestive or overt messages (subliminal or overt) in to the plot-line of a play, film, programme, video or advertisement. The eco-screening can take the form of a deliberate campaign or more of an underlying messaging.  Ideally the eco screening (or environmental media) content will fall somewhere in the middle, between 'bright-siding' the issues and excessive 'fear-mongering'.

The term, environmental media' includes eco-screening within its ambit. The Environmental Media Association (USA) holds annual awards (since 1991) in relation to all manner of media containing environmental messages, prompts and content.

Eco screening can be a green backdrop, overt green products such as solar panels, a recycling bin. May be incidental such as a green activity like main characters engaging in environmentally supportive actions such as taking public transport to work.

Examples of  eco screening within the plot-line or comedy skit: Brothers and Sisters TV series: ordering in of the organic, free range turkey (Nora), several episodes about a character's involvement with a green start-up company (Sarah), Would I Lie to You comedy show (tortoise disappeared and found near a can recyling plant just before it was due to get turned to pulp, another contestant orders in a bulk order of rechargeable batteries), Alan Carr You Tube - skit about free range chickens, Rhod Gilbert You Tube - expressing his frustration at not being able to buy a single loose potato.

I recently watched an episode of Offspring and Nina walked in to her house carrying groceries in her reusable bags, and Dr Martin Clegg was rattling on about the various sustainable options.  More examples of ec0 screening are discussed in my book - Green Spin (Or) Promoting the Green Message

Examples of digital entertainment and education videos are also discussed on my blog under the Eco Screen Dream tag.

Also here's a fun article worth reading sourced from Grist online magazine from 'Ask Umbra' about who's the greenest character on TV.

And finally, here's an animated video by talented cartoonist, Rohan Chakravarty (whose wonderful works are to be seen on green humour.com ). The video he created is in honour of promoting energy reduction for Earth Day. I love the way the animation communicates the message so effortlessly, and simply!

Why not write off to a TV production company or acting school and suggest to the props team, screen-writer and artistic director) that they incorporate some green screen content or eco-screen elements in to their props, backdrop, or even in to the plot-line, the next time they produce a popular TV drama.

This campaign idea might also apply to makers of TV advertisements which can potentially promote a green activity whilst also promoting a product.

1.  has a positive influence on behaviour change, in terms of social marketing.

2.  incorporates aspects of education, empathy, action which I mention in my book, Green Spin (Or) Promoting the Green Message.

3.  will usually consist of some form of story-telling

4.  May have an element of humour making sustainability fun,  and a little bit awe-inspiring.

Converse Conserve is a site that attempts to bring broader, more creative brush strokes to the campaign canvas.

We think Environmentalism should be more about the Heart than the Head.

(Due to personal matters - the sad loss of 2 key family members - the author of this site has been inactive on this site - but intends in 2019 to get back on track! So if we have not been replying to comments - apologies but being a Carer for 4 years, and dealing with two deceased estates is overwhelming. )

He comes up with huge campaigns like Composting on bikes, and in one Campaign he was Wearing an Entire Months (Average U.S) Garbage on his Back, to get the average American improving their recycling rates which are critically low compared with other Western countries.

Rob's Waste Wearing Suit was designed by Recycle Runway, a Fashion Design Label which combines the notion of Fashion and Refashioning (Repurposing or Upcycling from Old or Vintage in to New). With the fashion industry contributing so much to the overall pollution stream and to the carbon footprint, what better way than to make your fashion mark than to reduce the environmental burden of the clothing and accessories industry.

A major interest of ours is getting Upcycling happening on a broader Scale.

Here is our Pinterest Link to some great Upcycling Ideas - Clothing and Other Artefacts.